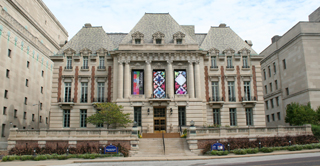 Located at 3669 Lindell Boulevard, the
Woolworth Building was constructed by the St. Louis Club in 1899.  Designed by Friedlander & Dillon of New York with St. Louis architect Lawrence Ewald, the Club remained in the building until a fire in 1925 that destroyed a significant portion of the interior. It became the headquarters of the F. W. Woolworth Company, under which name it received its landmark designation.  The building is now an art museum for St. Louis University.