An inside look explaining the structure of St. Louis City government and how it works.

The Board of Aldermen

The Board of Aldermen is the city's legislative body, which develops and approves city ordinances and resolutions.

The Board of Estimate and Apportionment 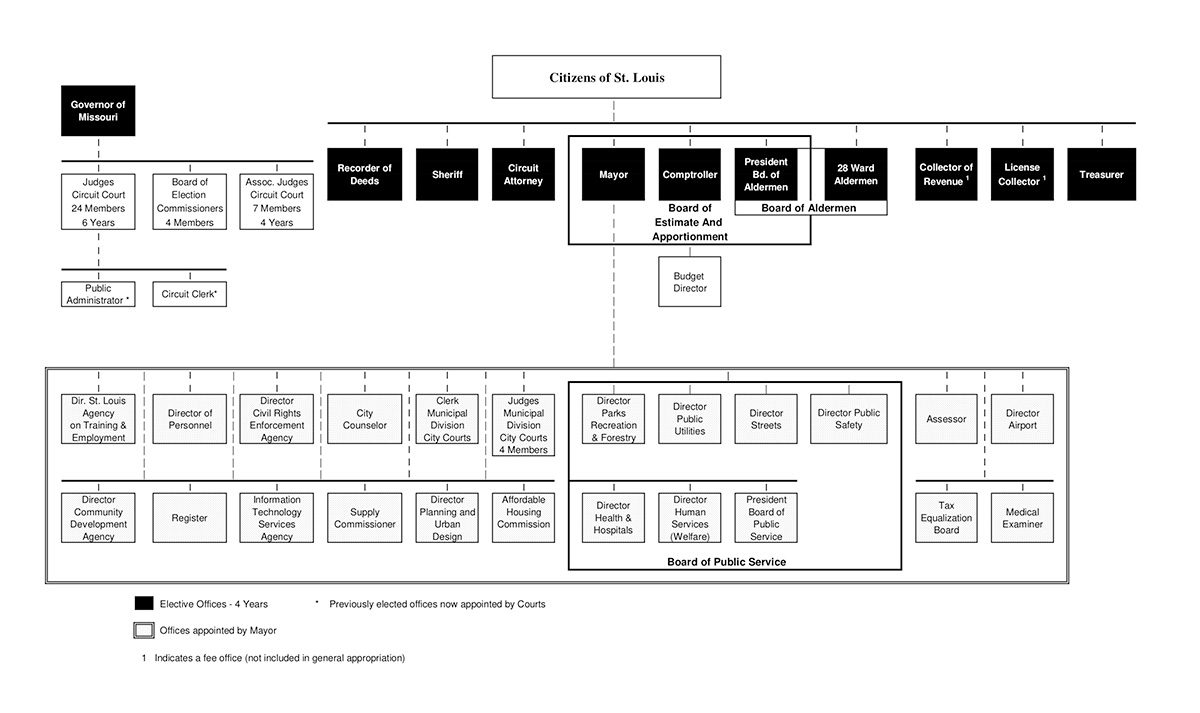 A few additional agencies have been created and are under state statutory authority, not under the mayor's office.

The Zoo-Museum District (ZMD) is a City of St. Louis/St. Louis County regional district established in 1972 that provides funding for:

Although the Zoo, Art Museum and Science Center (formerly the McDonnell Planetarium) were once City of St. Louis-operated, today they are each independent entities, financed by property taxes levied through the ZMD. Thanks to these property tax levies, all these institutions except the Missouri Botanical Garden are FREE to all visitors. (The Missouri Botanical Garden is free to St. Louis and St. Louis County residents until noon every Wednesday and Saturday).

The Regional Arts Commission (RAC) provides funding for arts and cultural programs, through a hotel/motel tax levied in the City of St. Louis and St. Louis County. The fifteen Commissioners are appointed jointly by the Mayor and County Executive and serve four-year terms.

The St. Louis Convention & Visitor's Commission (d.b.a. Explore St. Louis) is the driving force behind St. Louis' $5 billion convention and tourism industry. It is also the official destination marketing organization of St. Louis City and County, and operator of the America's Center Convention Complex. The organization is funded by hotel/motel tax and rents and revenues from the operation of the America's Center Convention Complex. The CVC's 11-member Board of Commissioners is headed by a chairman appointed by the Governor of Missouri, and five members appointed by the Mayor of the City of St. Louis and five by the St. Louis County Executive.

The Junior College District Board of Trustees consists of six members from St. Louis and St. Louis County, representing the four sub-districts of the JCD and elected periodically by district voters for staggered six-year terms.

The Bi-State Development Agency, currently doing business as Metro but still legally named Bi-State, operates the bus and light-rail (MetroLink) system in St. Louis and the surrounding counties. The public bus system in St. Louis is not a city operation. Metro is also responsible for the Call-A-Ride para-transit service, primarily serving the disabled, as well as the Gateway Arch Tram System, the Gateway Arch Parking Garage, the Gateway Arch Riverboats, and Downtown-Parks Airport in Cahokia, IL. Metro is headed by a 10 member Board of Commissioners (5 from Missouri, 5 from Illinois) appointed by the Mayor, St. Louis County Executive, and St. Clair and Madison Counties in Illinois. By tradition, the Mayor appoints 2 of the Missouri commissioners, and rotates with the county executive for a 3rd slot.

The Metropolitan St. Louis Sewer District (MSD) manages the surface drainage and sewage treatment system in the City of St. Louis and in St. Louis County east of Missouri Highway 109. Both primary and secondary treatment facilities are provided at the Bissell Point Plant on East Grand Avenue at the Mississippi River in North St. Louis and at the Lemay Plant on South Broadway near River des Peres, just south of the City limits. MSD is governed by a six member Board of Trustees. Three members are appointed by the Mayor and three members are appointed by the St. Louis County Executive.