Construction of Intelligence Campus in North St. Louis to Begin in 2017 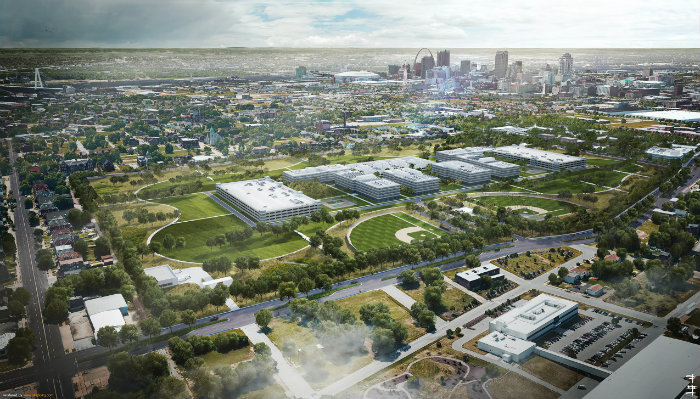 "The NGA has called St. Louis home for the past 72 years, and I am thrilled that DirectorCardillo has indicated that the Agency and its 3,100 talented employees very likely will continue to do so well into the future," Mayor Slay said. "St. Louis is very proud of the work the NGA does from its home here in our City. The construction of a new state-of-the-art intelligence agency in north St. Louis would have an immense impact. This preliminary decision is a victory for urban America. The many benefits to the future of both St. Louis and NGA are immeasurable, promising and exciting."

In the Final Environmental Impact Statement, Director Cardillo outlined why the City's site is preferred for building a 21st-century campus. Reasons include:environmental, cost and policy advantages;partnerships with universities and innovative, technology-based companies;the ability to recruit new talent based on the environment the City offers;and proximity to its data facilities and current and future workforce.

The Agency-preferred decision is not the final decision. The NGA will accept public comment on its choice until April 16, 2016. A final Record of Decision will be issued no earlier than May 1, 2016.

When a Formal Record is announced, the City will invite the community to engage in the design for the future of the neighborhood and begin finalizing property acquisition, which includes physically moving one resident's home to a nearby lot.

Building the new NGA West in the well-connected, 99-acre urban site at the intersection of N. Jefferson and Cass Avenues will change the game in the heart of the City and reverse decades of disinvestment in a neighborhood. It will be built adjacent to the old Pruitt-Igoe housing projects, righting the wrongs of federal policy from decades' past. The NGA West also will sit squarely in a Promise Zone, near a Choice Neighborhood, and within a Strong Cities, Strong Communities (SC2) City. Those federal designations are important to build resiliency and grow St. Louis.

"History has come full circle in North St. Louis," Congressman Wm. Lacy Clay said. "A great federal failure will now be replaced by a transformative federal success. The decision to select north St. Louis as the preferred site for the National Geospatial Intelligence Agency's new western facility is a $1.7 billion victory –the largest single federal investment in the history of the City of St. Louis."

This preliminary decision indicates the federal government making good on a promise it made to the people of St. Louis. When President Obama named north St. Louis a Promise Zone, the federal government pledged priority action to revitalize our urban core by investing resources to replace blight with opportunity and value-added amenities;to work with local developers to create large-scale, mixed-income, mixed-use developments that link housing, retail, infrastructure, and other development to jobs and transit centers -- the exact plans that surround the City's proposal to the NGA.

The new campus will also put thousands of people to work building it. St. Louis's local Building Trades has offered up a robust plan to make sure that nearly 40 percent of all labor hours are performed by minorities, more than doubling the federal guidelines. More than half of those hours would be performed by City residents. Together with the Trades, the City will expand its innovative Building Union Diversity program, giving priority placement to residents who live in the City or in the Promise Zone, which also extends through north St. Louis County.

"The State of Missouri has committed up to $131 million to support the development of the new NGA West –a smart investment that will pay huge returns for this City, this region, our state and our nation for generations to come," Gov. Nixon said. "Construction of NGA's new state-of-the-art western headquarters will invest more than $1.7 billion, create thousands of jobs, and transform what are now blighted city blocks into a vibrant neighborhood, teeming with vitality and economic activity."

"Missouri is home to more than 3,100 dedicated, highly-skilled NGA personnel who, for more than 70 years, have provided critical intelligence and combat support to keep Americans safe," US Senator Roy Blunt said. "The north St. Louis location will allow the NGA to continue its mission and recruit the next generation of intelligence professionals seeking the type of urban, car-optional lifestyle the City provides. In addition, the north St. Louis site provides unparalleled access to graduate school opportunities and high-tech neighbors, is a designated Promise Zone, and is convenient to Lambert Airport and the NGA's other facility in Arnold, Mo. The leadership of Mayor Slay, Senator McCaskill, Congressman Clay, and leaders in Jefferson City has been essential and united. Our continued support during the comment period will be important."

More on the Project

The NGA is expected to begin building a $1.75 billion facility in 2017 to move its 3,100 employees. As outlined in the final edition briefing book, the City of St. Louis location is a well-connected, 99-acre urban site at the intersection of N. Jefferson and Cass Avenues offered to the NGA at no cost. The Next NGA West video highlights how St. Louis will continue to help the NGA meet its mission, just as it has done for the past 72 years.

No pages meet the criteria