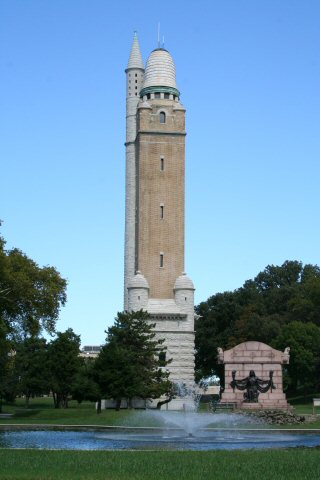 The Water Tower adjacent to the Compton Hill Reservoir was the third to be built in the City (after the Grand Avenue (White) Water Tower and the Bissell Street (Red) Water Tower. Located in the Compton Hill Reservoir Park at Grand and Russell Avenues, the tower stands 179 feet high and is 130 feet around at the base. It was designed by Harvey Ellis, for the firm of George R. Mann in 1897. Ellis was a nationally-known architect who designed St. Louis City Hall and the Washington Terrace Gatehouse, among many other commissions.

The three water towers were in fact standpipes encased in architectural towers and a critical part of the City's early water system. The standpipes absorbed surges from the late-19th-century reciprocating water pumps, ensuring consistent water pressure. In 1972, The Compton Hill Water Tower was placed on the National Register of Historic Places, significant for both its architecture and engineering.

The Tower was an immediate tourist attraction and a highlight for visitors to the St. Louis 1904 World's Fair. Taken out of use as a standpipe in 1929, the Tower continued to be used as a support for the Water Division's dispatch antennae until 1984, when asbestos was discovered in the wrapping of its water tank. Closed to the public, the tower deteriorated until in 1995, when the City contemplated its demolition. Local residents and neighborhood groups rallied and formed the Water Tower and Park Restoration Society to work with the City to save the Tower. In 1999 a $19 million restoration project was completed. Today, the tower is open for tours every Saturday from April to November and for special events.

Click on the window below to choose another landmark