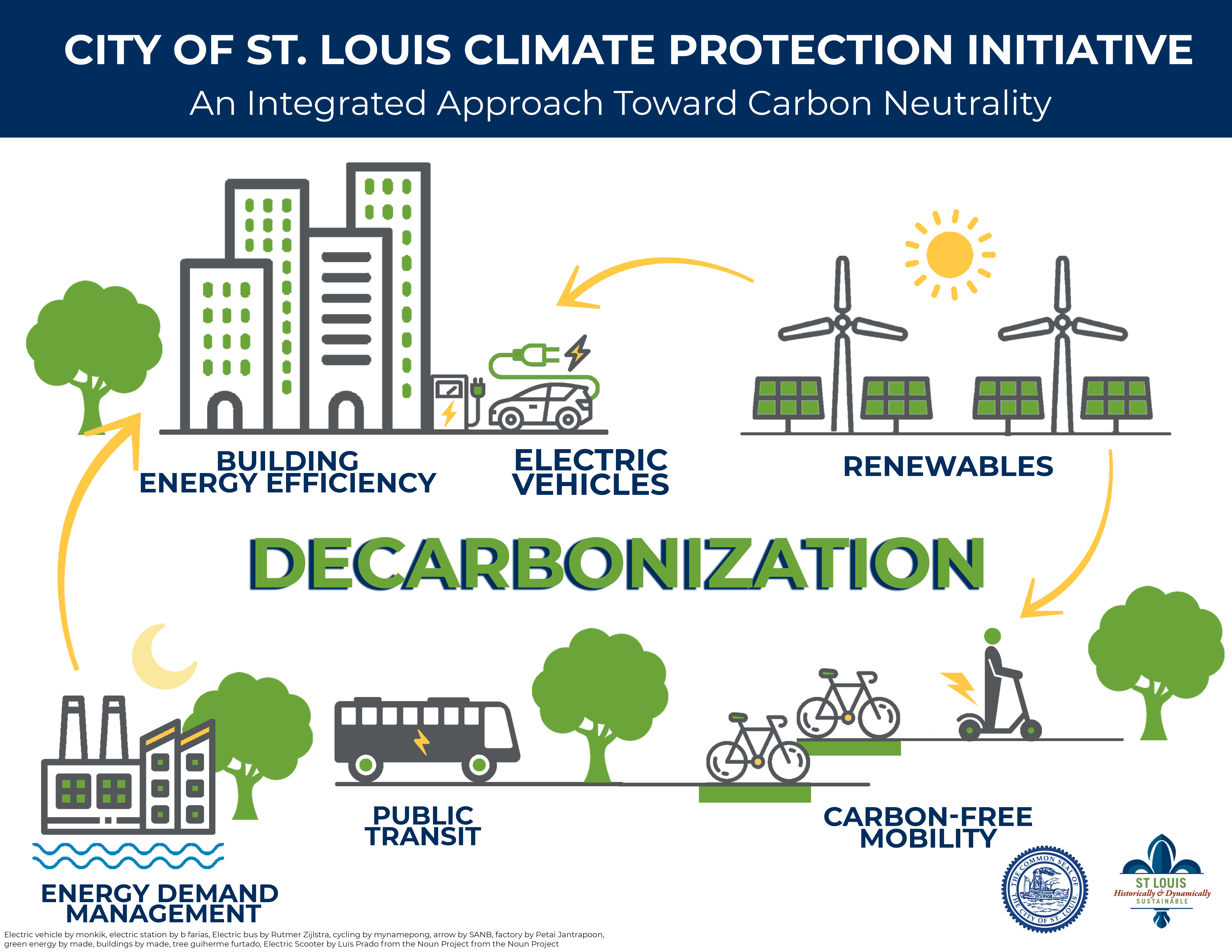 The City of St. Louis is fully compliant with the comprehensive climate planning and monitoring aspects of the Compact of Mayors. In November 2015, former Mayor Slay signed the Compact of Mayors (now the Global Covenant of Mayors for Climate & Energy), and pledged to gather greenhouse gas (GHG) data, set greenhouse gas emissions reduction targets, identify climate hazards, assess climate risks and vulnerabilities, and develop a climate action plan to address mitigation, as well as a climate adaptation plan. The pledge included a multi-year commitment that was tracked in phases through the award of earned badges.  In November 2018, the City first earned all of the Compact of Mayors badges, and is considered 2021 Compliant with the Global Covenant of Mayors for Climate & Energy program.

As part of the Climate Mayors, former Mayor Krewson summarized the City's sustainable Climate Protection Initiative goals and achievements in May 2020. Read it here.

Climate Action Planning in the City of St. Louis

The City has conducted Greenhouse Gas Emissions Inventories for the years 2005 (baseline), 2010, 2013, 2015, and 2018. These GHG Inventory Reports have been shared with the Carbon Disclosure Project since 2012, and are posted online. The City always conducts a Government Operations (municipal) GHG inventory, as well as Community (all entities within the City of St. Louis) GHG inventory. The most recent GHG Inventory was for calendar year 2018:  City of St. Louis 2018 Greenhouse Gas Emissions Inventory Report.

In 2016-17, the City's Sustainability Director worked with a team of consultants, community representatives with technical expertise, and departmental staff involved in climate issues, to develop a detailed Climate Action & Adaptation Plan recommended for the City of St. Louis Sustainability Plan.

To understand projections of the St. Louis Climate Hazards Report conducted by John Posey of East-West Gateway Council of Governments in 2016, in 2018 the City's Office of Sustainability oversaw development of a City of St. Louis Climate Vulnerability Assessment, developed in conjunction with the City's Office of Resilience, City Departments of Health and Emergency Response, Planning & Urban Design Agency, and the Brown School at Washington University in St. Louis.

Below is an Infographic summarizing the City's Climate Protection Initiative. Details and links to various climate protection documents are included below the infographic. (Click to enlarge) 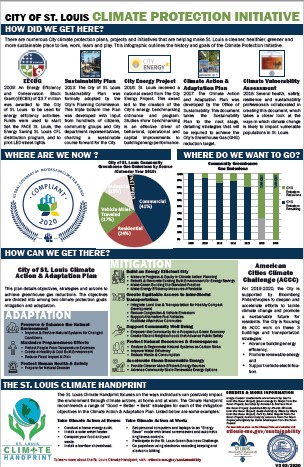 A Greenhouse Gas (GHG) Emissions Inventory is an assessment of the GHG emissions associated with energy consumption for government operations and community sources, leaked refrigerants, fire suppressants, generation from biogenic processes (landfills, wastewater) and other chemical and biological processes. The gases being measured include Carbon Dioxide (CO2), Methane (CH4), Nitrous Oxide (N2O), Hydrofluorocarbons (HFCs), Perfluorocarbons (PFCs), and Sulfur Hexafluoride (SF6). Conducting a greenhouse gas emissions inventory is important  because one cannot effectively reduce what isn't measured. Data is used to establish a baseline of information, and then to inform the development and tracking of atmospheric models, strategies, and policies for emissions reductions. The GHG emissions inventory is also important because it helps build the context for meaningful sustainability initiatives and identify areas of improvement.

The City is using the year 2005 for its GHG Baseline, because that is the year former Mayor Slay signed the US Conference of Mayors Climate Protection Agreement. The City of St. Louis completed Greenhouse Gas Emissions inventories for the Baseline year 2005, and updated reports for the calendar years of 2010, 2013, 2015 and 2018.

In October 2018, the City of St. Louis was selected as one of only 25 cities nationwide to participate in the Bloomberg  American Cities Climate Challenge (ACCC) program from 2019-2020.  The City's ACCC work will focus on Buildings and Transportation actions and policies -- such as building energy performance, renewable energy, and vehicle electrification -- that will have a measurable climate impact by December 2020. The summary slide below outlines the three key focus areas and specific objectives being undertaking by the City's ACCC Team. 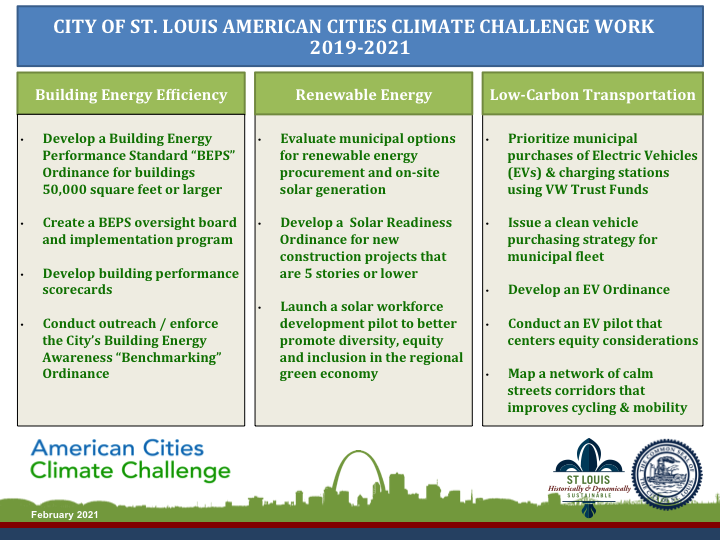 There are several renewable energy efforts underway in the City of St. Louis. Examples include:

For information and resources related specifically to solar energy in the City, please visit the tab at left:  Solar And The City.

Existing buildings are the source of nearly 80% of the greenhouse gas (GHG) emissions in the City of St. Louis, so it is critically important to find ways to increase building performance, improve building energy efficiency, and expand clean sources of building energy.

In 2016-17, St. Louis became a City Energy Project awardee, with support from the Natural Resources Defense Council (NRDC) and the Institute for Market Transformation (IMT). In February 2017, former Mayor Slay signed an Energy Benchmarking Ordinance that applies to buildings greater than 50,000 square feet. Further information and supporting documents relating to Energy Benchmarking and Building Energy Performance are posted at www.stlbenchmarking.com.  The City's energy benchmarking specialist and program is housed by the Building Division, which offers support, such as this benchmarking resource sheet.  The Gateway Chapter of the USGBC partners with the City to hold Energy Benchmarking Training.

In 2017-18, the City's Building Division led the effort to update several existing Building Code elements to require greater energy efficiency. The updated Building Code provisions went in to effect in August 2018 and are among the most progressive in the Midwest.

Electric Vehicles in the Municipal Fleet

Utilizing award funding from the Volkswagen Trust Settlement from the Missouri Department of Natural Resources the City has begun transitioning its municipal fleet to electric vehicles (EVs) and their associated EV charging infrastructure.  In March 2021, the City of St. Louis unveiled the first municipal Chevy Bolts, 100% Zero Emission vehicles. 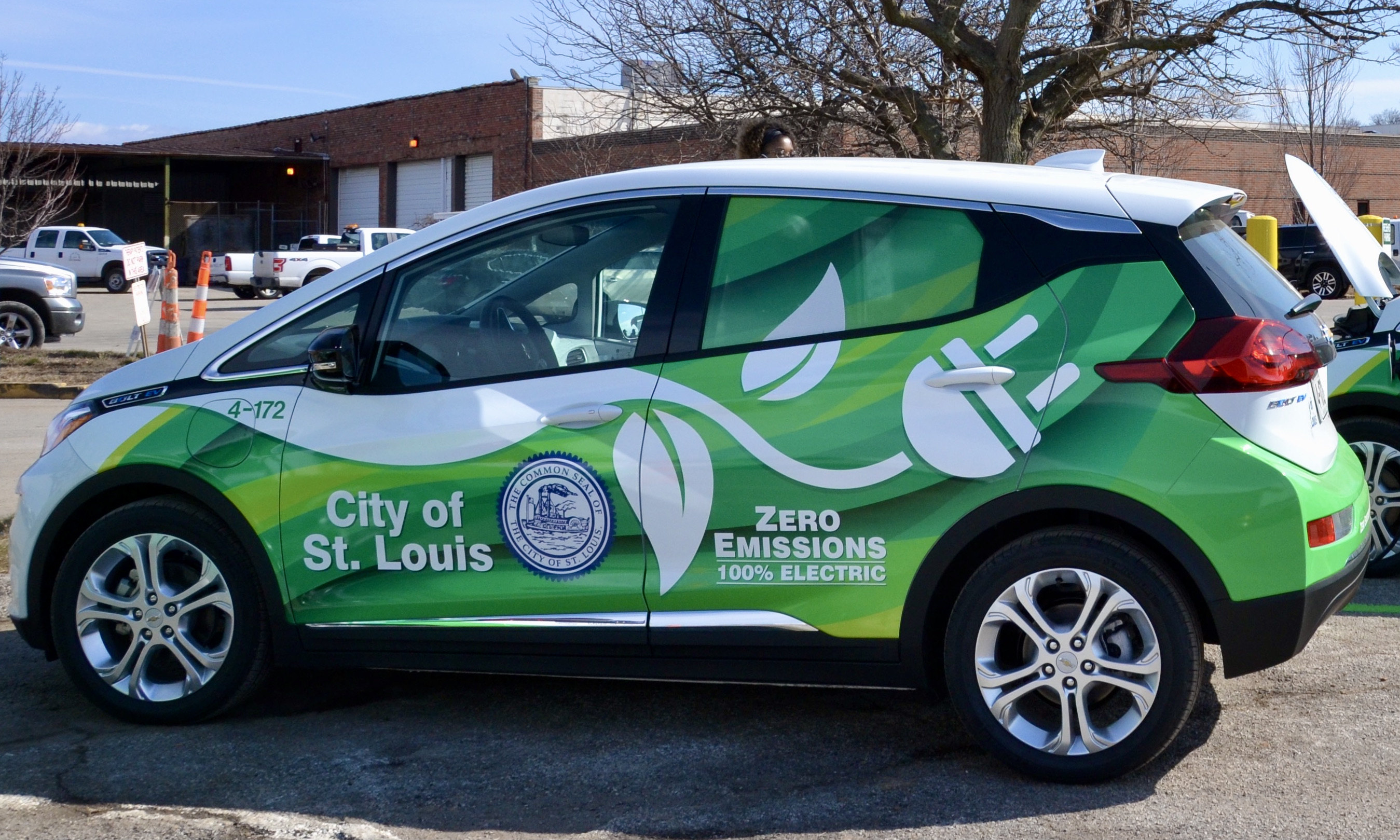 EV Charging Stations For Public Use -

One of the City's partners in the American Cities Climate Challenge, Forth Mobility, was successful in winning a grant from the U.S. Department of Energy to conduct an Equity Pilot that promotes Electric Vehicle use in North City in partnership with St. Louis Area Agency On Aging. The "SiLVERS" project, (St. Louis Vehicle Electrification Rides for Seniors) was launched in Fall 2021.

Utility Incentives and Resources for EVs and Charging Stations -

In 2008, St. Louis City passed an Anti-Idling Ordinance  that prohibits vehicle idling for longer than five minutes (10 minutes when temperatures dip below freezing). An idling engine emits harmful tailpipe exhaust in a very concentrated area, exposing anyone nearby to air pollutants thought to be a cause of asthma and other health problems. Avoiding idling is likely to reduce emissions and improve health and air quality. Please reference the idling brochure for more information about the benefits of reducing idling and the restrictions on idling in the St. Louis area. 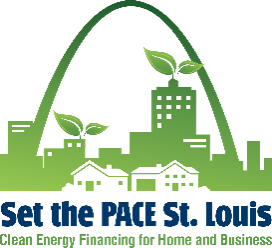 In 2013, the Office of Sustainability worked with the St. Louis Development Corporation (SLDC) to launch a Property Assessed Clean Energy (PACE) financing program for Commercial buildings located in the City of St. Louis. In 2017, the program was expanded to Residential buildings. The program - known as Set The PACE St. Louis - is housed at SLDC, and is overseen by the City's Clean Energy Development Board. The innovative financing tool is an effective resource for buildings to undertake energy efficiency and renewable energy improvements. Quarterly reports on new activities and Sustainability Metrics are delivered by the Set The PACE St. Louis Program Administrators to the Clean Energy Development Board. 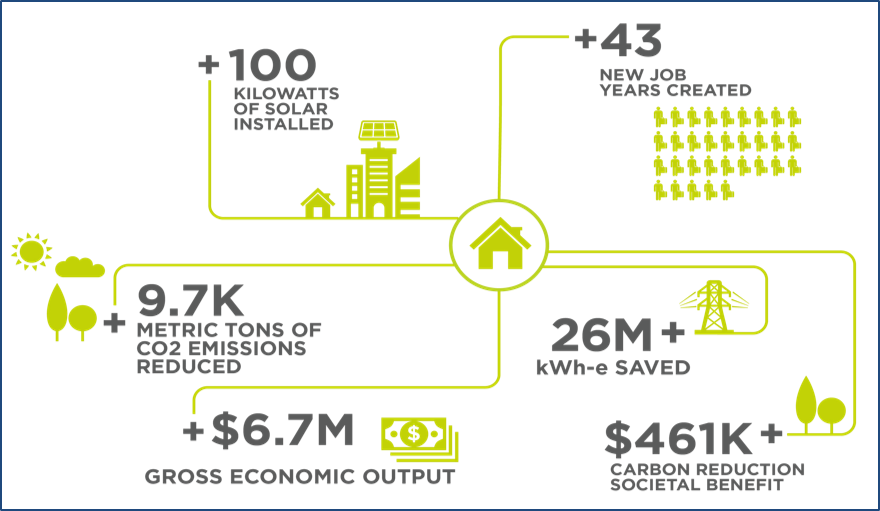 Approximately $3.7 Million was spent on 212 separate Set The PACE St. Louis energy efficiency, renewable energy, and climate resilience property improvement projects for residential and small commercial (under $750,000) buildings located in the City of St. Louis between May 2017 and December 2019.  Ygrene Energy Fund is the Program Administrator of the Set The PACE St. Louis Residential/Small Commercial program for the City of St. Louis and its Clean Energy Development Board. The calculations are based on data utilizing Ygrene's triple bottom line Sustainability Impact Metrics for the Residential/Small Commercial PACE program. In addition, 17 of the 80 authorized contractors in St. Louis were minority or women owned businesses. 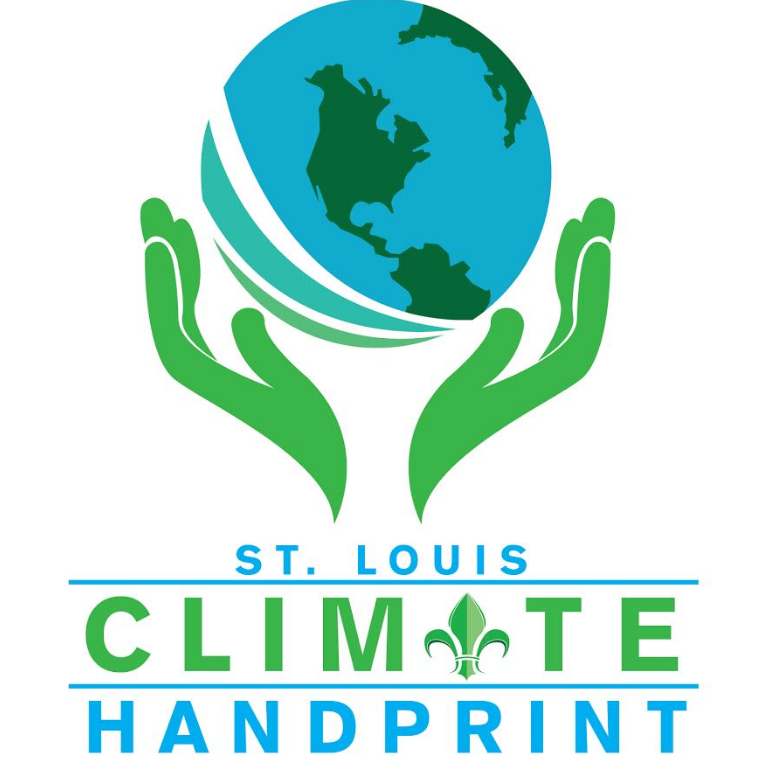 Taking positive action to help the environment in day to day actions and decisions. For suggestions on how to make a difference in addressing the challenge of climate change, check out these Good - Better - Best recommendations for how individuals can take climate action At Home and At Work.

The City of St. Louis was one of 16 cities that joined the City of Chicago in posting research from the U.S. Environmental Protection Agency’s (EPA) Climate Change Website after the information was removed from the federal government’s site.  To view the archived EPA climate data and resources visit websites://https-climatechange.stlouis

The City of St. Louis received $3.7 million in 2009 from the federal Energy Efficiency and Conservation Block Grant Program  (EECBG) to use for a number of  energy efficiency activities between 2010-2013.  With its EECBG funds, the City conducted seven comprehensive energy audits of municipal buildings. Substantial retrofits were conducted at City Hall and EECBG Courthouse with Carnahan funds, too. The City also piloted the use of 3 types of energy efficient street light upgrades to determine which are the most reliable, efficient, and cost effective for future use.

EECBG funds were used to reduce energy consumption of City residents and businesses. In conjunction with EECBG and Ameren, more than 100,000 compact fluorescent light bulbs were distributed to more than 25,000 City households.

The City formed the Clean Energy Development Board and launched Set The PACE St. Louis, an innovative financing technique to promote energy efficient improvements on private properties. This PACE financing has expanded from just commercial to residential properties in the City of St. Louis. There is also a minority and woman contractor inclusion element to the Set The PACE St. Louis program. Visit www.ygrene.com for information on how to get PACE financing on residential or small commercial properties in the City of St. Louis.

The City also used some of its EECBG funds to reduce energy consumption in the transportation sector by promoting alternatives to fossil-fueled vehicle use by adding bike racks, bike lanes, and creating the Downtown Bicycle Station -- the region's first public commuter bike station. See below for other cycling information.

The City of St Louis partnered with Ameren Missouri and Americorps to distribute more than 100,000 Compact Flourescent Light (CFL) Bulbs to more than 25,000 households in the City. These bulbs are 75% more energy efficient and last up to ten times longer. This initiative minimizes energy consumption, helps residents save on their utility bills and helps keep energy emissions out of the environment. The CFL bulbs were packaged with literature explaining the benefits and proper use of CFLs. Thus, the initiative also helped raise awareness about the city’s carbon footprint and educated citizens about environmentally-responsible actions they can institute at home.

Between 2002 and 2005, the City also converted 16,000 traffic signals to LED light technology resulting in cost and energy savings.

Through its cycling initiative, the City of St. Louis has embraced alternative means of transportation (such as walking or biking) as healthy and environmentally-friendly ways of getting around. The City has a Bike-Ped Coordinator position, and many details about Bicycling in the City can be found in the Streets Department, which houses the Bike-Ped Coordinator postition and oversees the City's Dockless Bike Share program.

The City is a regional leader in cycling facilities, and is adding bike lanes and racks in partnership with Great Rivers Greenway District and the Bike St. Louis master plan. In 2017, the City of St. Louis was deemed Silver Level Bicycle Friendly Community by the League of American Bicyclists. Through the efforts of both city government and non-profit organizations, a number of initiatives now promote alternative transportation in the City.

The City partners with local non-profit organizations such as Great Rivers Greenway and Trailnet  to make alternative transportation more viable and prevalent. Together with the City of St. Louis, these groups created a Commuter Bicycle Station in downtown St. Louis. The Downtown Bicycle Station  is a 1,430 square feet, offer secure access and feature more than 100 bike racks, showers, and lockers ideal for cyclists commuting to work. Such collaborative projects helped St. Louis win an All American City award in 2008.